Cosmetics, also known as make-up, are care substances used to enhance the appearance or odor of the human body. They are generally mixtures of chemical compounds, some being derived from natural sources (such as coconut oil) and some being synthetics.

In the U.S., the Food and Drug Administration (FDA), which regulates cosmetics, defines cosmetics as “intended to be applied to the human body for cleansing, beautifying, promoting attractiveness, or altering the appearance without affecting the body’s structure or functions.” This broad definition includes any material intended for use as a component of a cosmetic product.

The FDA specifically excludes soap from this category.
The word cosmetics derives from the Greek κοσμητικὴ τέχνη (kosmetikē tekhnē), meaning “technique of dress and ornament”, from κοσμητικός (kosmētikos), “skilled in ordering or arranging” and that from κόσμος (kosmos), meaning amongst others “order” and “ornament”.
Ancient Sumerian men and women were possibly the first to invent and wear lipstick, about 5,000 years ago.

Whether I’m wearing lots of makeup or no makeup, I’m always the same person inside.

They crushed gemstones and used them to decorate their faces, mainly on the lips and around the eyes. Also around 3000 BC to 1500 BC, women in the ancient Indus Valley Civilization applied red tinted lipstick to their lips for face decoration. Ancient Egyptians extracted red dye from fucus-algin, 0.01% iodine, and some bromine mannite, but this dye resulted in serious illness. Lipsticks with shimmering effects were initially made using a pearlescent substance found in fish scales. 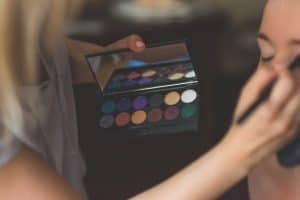 Six thousand year old relics of the hollowed out tombs of the Ancient Egyptian pharaohs are discovered. According to one source, early major developments include:

Kohl used by ancient Egypt as a protective of the eye kohl
Castor oil used by ancient Egypt as a protective balm.
Skin creams made of beeswax, olive oil, and rosewater, described by Romans.
Vaseline and lanolin in the nineteenth century.
The Ancient Greeks also used cosmetics as the Ancient Romans did. Cosmetics are mentioned in the Old Testament, such as in 2 Kings 9:30, where Jezebel painted her eyelids—approximately 840 BC—and in the book of Esther, where beauty treatments are described.

Born in Abidjan, Côte d´Ivoire, Aïcha Fall lived her childhood there before leaving for France for her studies. Over time, Aïcha learned to create a link between her identity, her culture and her traditions, through Art.  Aïcha is a storyteller and she uses photography to write and tell her stories.  Full of life, of movements whether spontaneous or composed, the scenes she captures are always talkative and original. Bursting with creativity, she diverts elements that surround her to transform them into works of art. Do big things with little that’s her cup of tea. For exemple she using a mobile …